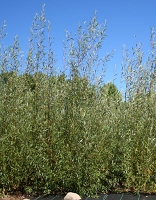 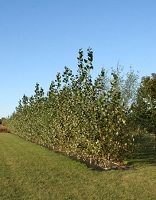 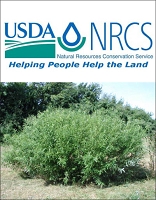 There are many different ways to plant a screen, depending on what you are trying to accomplish.  The following examples will give you some options when trying to decide which type to plant.

Hybrids are most often used when you want a tall, thick screen in as quickly as possible.  Hybrid screens create a visual block in an area such as between a road and field, to divide a larger space into multiple smaller spaces, etc. faster than any other perennial we know of.  Hybrids tend to hold their leaves late into the fall, but will ultimately drop their leaves.  If planted thick enough the screen will still maintain some of its "blocking" properties, as in you might be able to see through it slightly, but it will deter poaching and shining throughout the dormant season.  Hybrids are also useful because of their height.  Even in the dormant season a 50' tall screen is pretty effective.

Dense screens are planted "thicker" so the screen closes faster.  The spacing between rows and between trees is relatively small, forcing the trees to crowd each other and fill in sooner.  The advantage of a dense screen is its ability to form a visual border in a season or two.  Almost every screen we plant is planted as a dense screen.  We don't like waiting, it only takes a few more trees, and the bulk of the work and expense is in site preparation and ground cover.  Dense screens can be thinned after a 2 or 3 seasons of growth if preferred.  This approach gives you the benefits of a quick screen and the thinning allows the trees to grow wider as they mature (not to mention free cuttings!).

Our recommendation for a dense screen is as follows:
6' wide ground cover.
6' between trees in each row.
4' between rows on staggered centers.

Standard screens are a balance between a dense and wide screen.  They will still close in 2 - 3 seasons, but won't require thinning in future growing seasons.  If you prefer a more mature tree look to your screen (rather than a wall of green) and don't mind waiting a few growing seasons, the standard screen is a good choice. 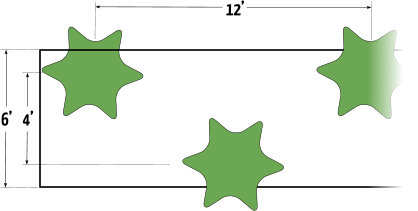 Our recommendation for a standard screen is as follows:
6' wide ground cover.
12' between trees in each row.
4' between rows on staggered centers.

Wide screens are planted closer to the trees width potential.  The spacing between rows and between trees is generous enough to allow the trees to touch near maturity.  Wide screens will take 3 - 6 years to "close".  If you aren't in a hurry and want a more "open" look to the screen, a wide screen is a good choice. 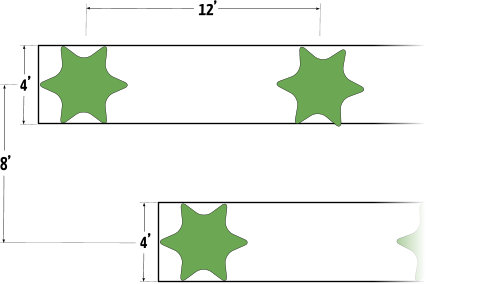 Our recommendation for a wide screen is as follows:
3' or 4' wide ground cover.
12' between trees in each row.
8' between rows on staggered centers. 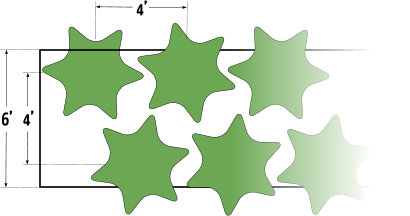 Our recommendations for a shrub screen is as follows:

6' wide ground cover.
4' between shrubs in each row.
4' between rows on staggered centers.

We sell everything you need to plant your own professional quality screen, you can also purchase our "Screen By The Foot".  We custom package everything you need to plant your screen!
The above examples are only meant to be ideas for screen plantings.  There certainly are many more possibilities, and this is by no means a complete list.  If you have any additional ideas you would like to see here please let us know on the Contact Us page.